The Armed Forces comprises four service branches – Indian Army, Indian Air Force, Indian Navy, and Indian Coast Guard. The Armed forces fall under the Ministry of Defence. The ministry is the largest landholder in the country. The ministry is charged with the responsibility of countering insurgency and ensuring external security of India.

Ministry of Defence is the largest landowner in the country. It holds 43.4 lakh acres (17,570 sq. km) of area. This area is about twelve times the area of New Delhi (1,484 sq. km) and four times the area of Mumbai (4,355 sq. km). Most policy discussions treat Defence property as “off limits” when it comes to identifying surplus landholdings. Defence holds the largest blocs of urban land in the country.
Countries such as Australia, Canada, United Kingdom, United States, and the Philippines all have found that more than 90% of total public land identified as “surplus” and monetized has come from outdated military bases. [1]
The value of the surplus and misused land parcels under the Armed forces when freed up is ₹ 21.53 lakh crore (₹ 86,000 per household). This estimate is computed using conservative land prices and a meagre FSI of 1.

In addition to this land, 62 cantonment boards (see map 1, and 2 and accompanying tables 1, and 2) use more than 2,18,068 acres ( sq. km). Most of the cantonment boards are located in the heart of the city occupying prime real estate. 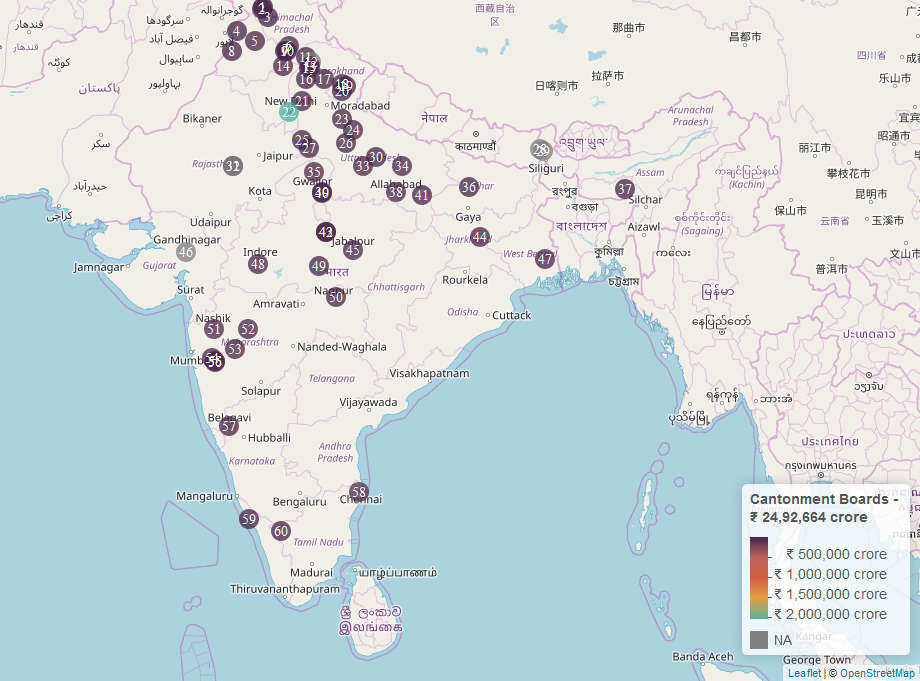 Another 78,846 acres (sq. km) of land worth 1.59 lakh crore is inventoried as surplus by the Defence Management Estate across 38 military stations in the country as highlighted by CAG in its performance audit report. See Map 2 and its accompanying Table 2 [3] 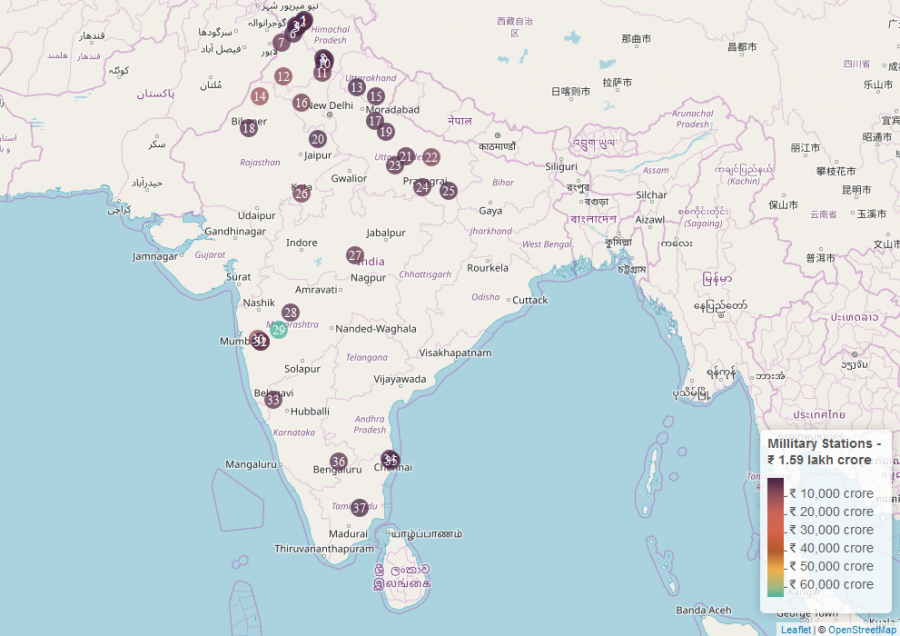 Navy Nagar situated in the primmest urban space in Mumbai is another instance of valuable land parcel locked. The prime land is situated right next to the central business district and comprises of accommodating a handful of naval and military buildings. It stands as a stark example of a colonial hangover being established in the year 1796 to signify the might of the British troops, it's location serves little practical purpose. 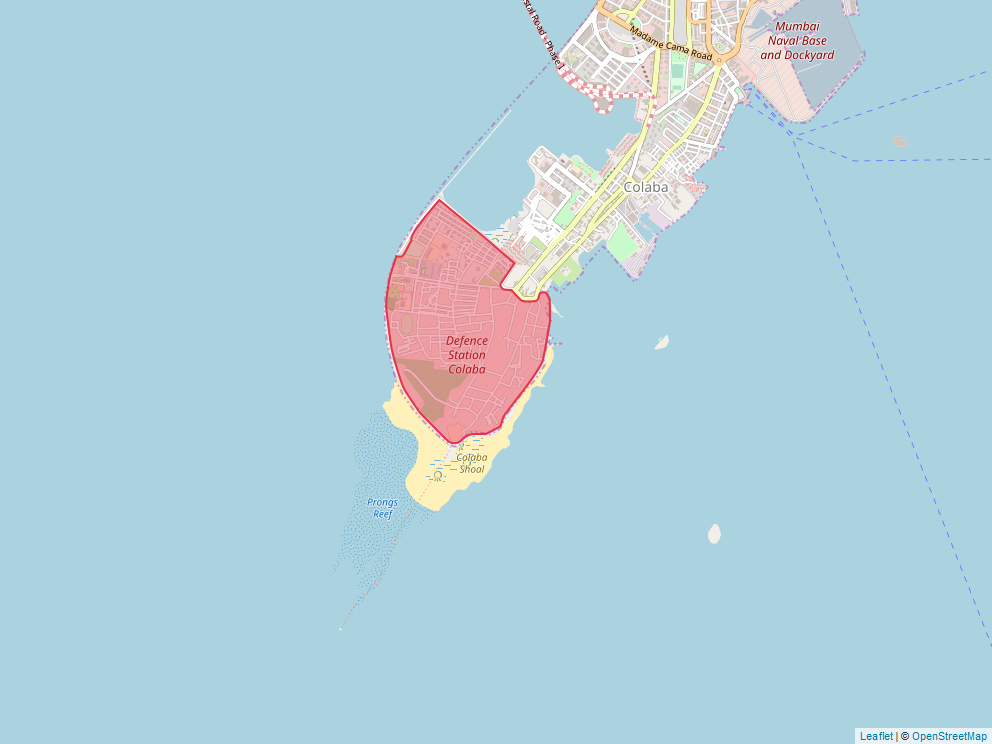 Its value is anywhere above ₹ 3 lakh crore.[5]

Delhi Cantonment occupies 43 square kilometres in the heart of the metropolitan region. In 2001, time of the last census, Delhi Cantonment had a population of 124,000. Eleven hotels are located within the cantonment, as well as a variety of commercial establishments and upscale housing.

The New Delhi cantonment board sprawls for an area of 10,625 acres within the national capital region. The army also owns an Army golf course, the size of 100 acres located at Dhaula Kuan, another prime urban land. The military has 97 luxury golf courses [6] handled by a privately-run company, Army Zone Golf, covering about 8,000 acres of land. These gold courses are pointed out illegal by the CAG [1] citing “they should not have been built in the first place, as golf is not an authorised military activity”. 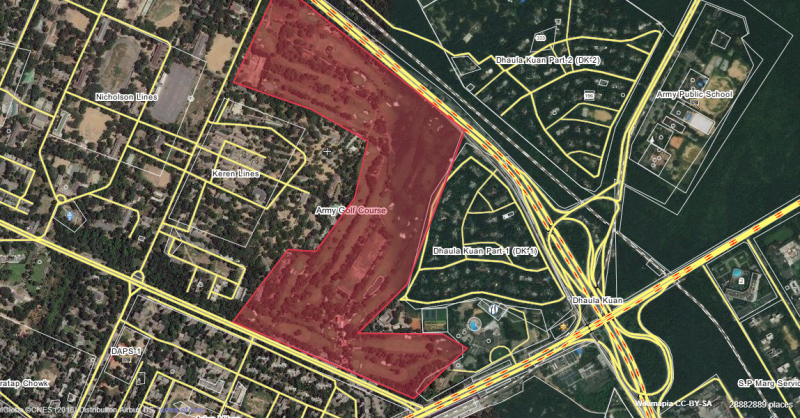 Some Defence lands are allocated to favoured parties under legacy leases at far below market rates. The Agra (Golf) Club occupies 17.68 acres for which it has paid the annual rent of Rs 58.92 per year since 1992. The racetrack in Pune Cantonment has been leased to Royal Western India Turf Club since 1902. The lease is for 65.15 acres, but over time the Club has expanded onto an additional 24.1 acres of Defence land without sanction

Lucknow cantonment board occupies 6,918 acres of land worth Rs. 13,998 crore (conservative estimate using price of land @ Rs. 5,000 /sq. m). The distance between the cantonment and central business district (Hazratganj, Aminabad, and Chowk A) is 7 km. For a city sprawling across 2,528 sq. km. Such a prime urban land is locked and restricted from access to the city for commerce and housing.

Jaipur army station occupies prime urban space located from a distance of 9 km from the old walled city of Jaipur (also, its central business district). The military station includes a sprawling and restricted Golf course in the middle of the city. Refer to the map to identify the urban landlocked by the military station. 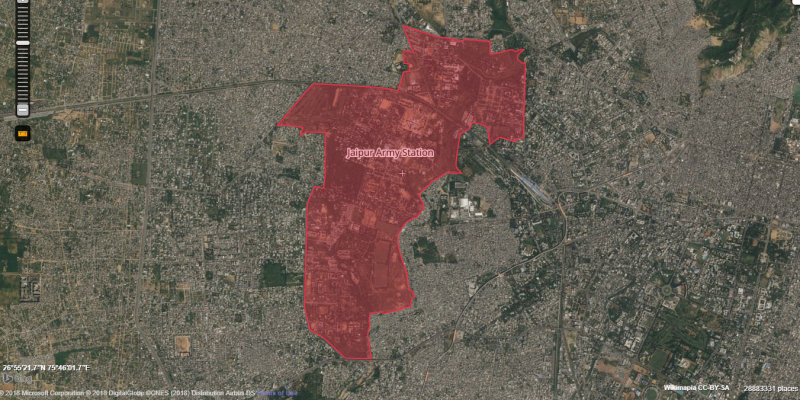 Most of such valuable land parcels are locked for the recreation and restricted usage of a handful army personnel. Another such instance of a major land parcel is that of Navy Nagar in Mumbai.