Hindustan Aeronautics Limited (HAL) is a state-owned defence company which was established on 1st October 1964. The company has its headquarters in Bengaluru. HAL functions under the control of the Ministry of Defence.

HAL is in the business of manufacturing, designing, and repairing aircrafts, helicopters, and related systems like avionics, instruments, and accessories.

In the year 1963, the State Government of Odisha allotted 12,000 acres of land belonging to 11 villages including Kakigaon, Chikapur, Khaliput, Chakriliput and Kodinga to HAL. [1] However, HAL utilized only 3,121 acres of this land and it further handed over 6,000 acres to Cobra Battalion and the Central University of Odisha. At present 2,918 acres of land under HAL is been kept unused. It is also been observed that HAL failed to properly rehabilitate these villagers whose land they acquired in 1963.

According to Comptroller Auditor General (CAG), in Koraput about 50 acres of land held by the HAL division is under encroachment by the local villagers for over 25 years. [2]

In the year 1985, HAL acquired another 11 acres of land at Belur, Vibuthpura, and Vibuthpura in Bengaluru. This land was originally occupied by slum dwellers. HAL acquired identified and acquired additional land to evict and rehabilitate these slum dwellers but failed to evict them. As a result, 11 acres of valuable urban land acquired by HAL remained under encroachment as on March 2015.

Refer to the map and accompanying table for details. 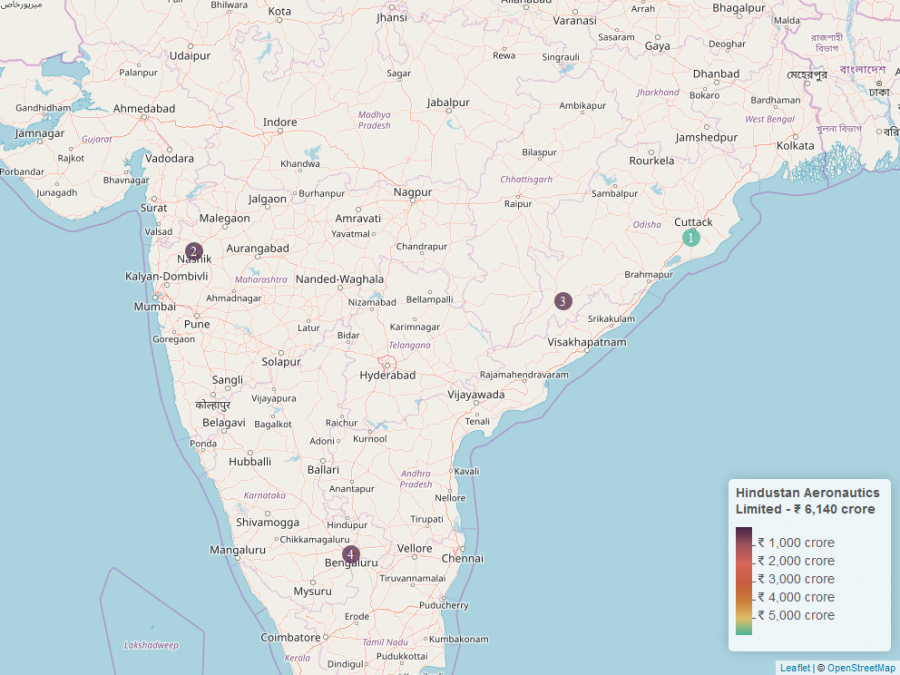 Around 2,982 acres of land held under HAL is either kept unused or is under encroachment across the country. The total value of this surplus and encroached land heldby HAL is ₹ 6,140 crore as per conservative estimates assuming a meagre FSI of 1. Such land parcels are being abused and restricting urban expansion and development in major cities.