The National Textile Corporation is a Central Public Sector Enterprises (CPSE), established in April 1968. The main purpose of the company is to re-establish the sick textile undertakings in the private sector. The Textile mills were nationalized under Sick Textile Undertakings (Nationalization) Act 1974. The National Textile Corporation owned around 16 textile mills in 1968, which increased to 103 in the year 1972. By the year 1995, the company owned 119 Textile Mills with an authorized capital of ₹100 million.

NTC happens to be among the largest landholders in the country with most land parcels in central and prime urban spaces. The total land with NTC from information gathered from publicly available sources is 1,158 acres with a value of ₹ 25,622 crore (estimated using conservative land prices and an FSI of only 1). See map and its accompanying table for details.

The textile mills owned by the National Textile Corporation in Mumbai have closed down for decades. These abondoned mills are sitting on huge tracts of land which can be used for many other productive purposes of industrialization, commercialization, affordable housing, or educational institutions. Mumbai was the land of 56 textile mills occupying around 600 acres of land and providing employment opportunities to more than 2.5 lakh workers. After 1982 the issues arising between the workers union and textile mills owners with respect to wages led to the downfall of the textile industry in Mumbai. The Maharashtra Government asked NTC and Private mills owners to develop the non-operational textile mills only if they give two-thirds of land to the government for the purpose of affordable housing.

The 2001 amendment made by the then government made things worse. The amendment laid down that only "surplus land" within the mills shall be divided. While, land inhabited by the mill's build-ups would continue remaining with the owners of the mills. In the absence of such an amendment Mumbai could have received at least 400 acres of land for its development.

The vacant mills in Mumbai occupy highest valued parts of the city. They are abandoned and locked keeping away affordable housing and possibilities of development for the city. From the information available publicly, of 13 abandoned mills in Mumbai lock 155.83 acre of the value ₹ 31,533 crore (valued using conservative land prices and an FSI of only 1). See the map and its accompanying table for more details. 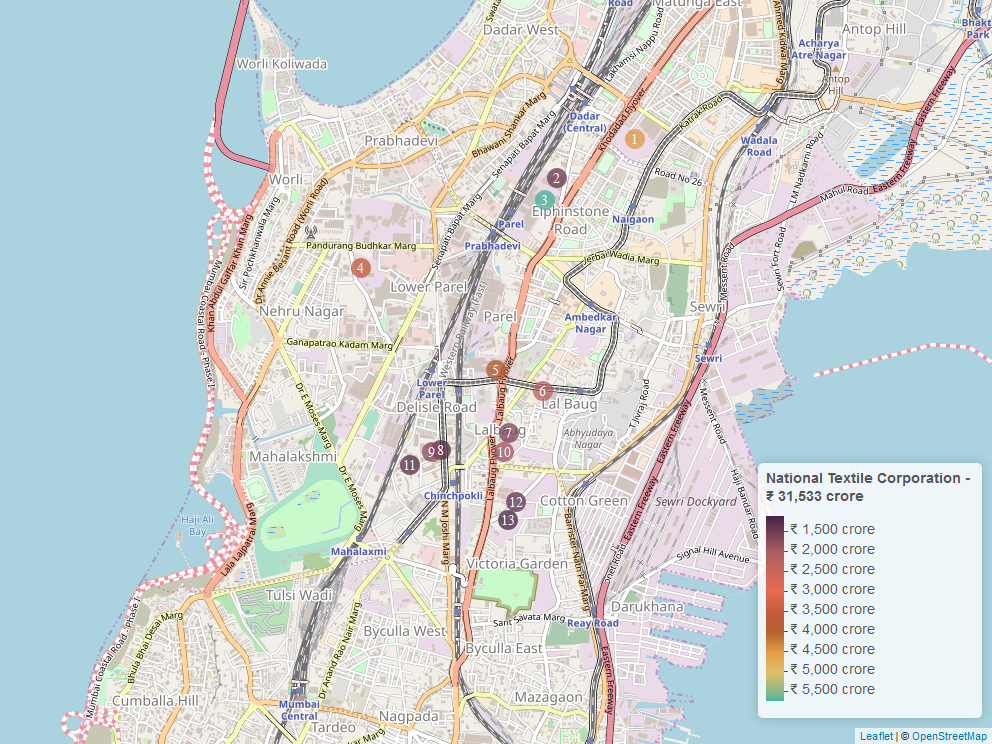