India has thirteen major ports. All the major port trusts report to the central Ministry of Shipping. Twelve of the major port trusts are organised under the Major Ports Trust Act (1963). In addition, there are about 200 state-government and private ports in India. Major Ports Trusts hold more than 2.5 lakh acres of land, out of this 15,550 acres is vacant, without any plans for future port operations [1]. These land parcels lock key urban areas. The largest part of the total consists of tidal land at Kandla Port.
A conservative estimate of the surplus land available with major ports is 27,379 acre valued at ₹ 20,02,717 crore (assuming an FSI of only 1). See the map and its accompanying table for individual estimates. 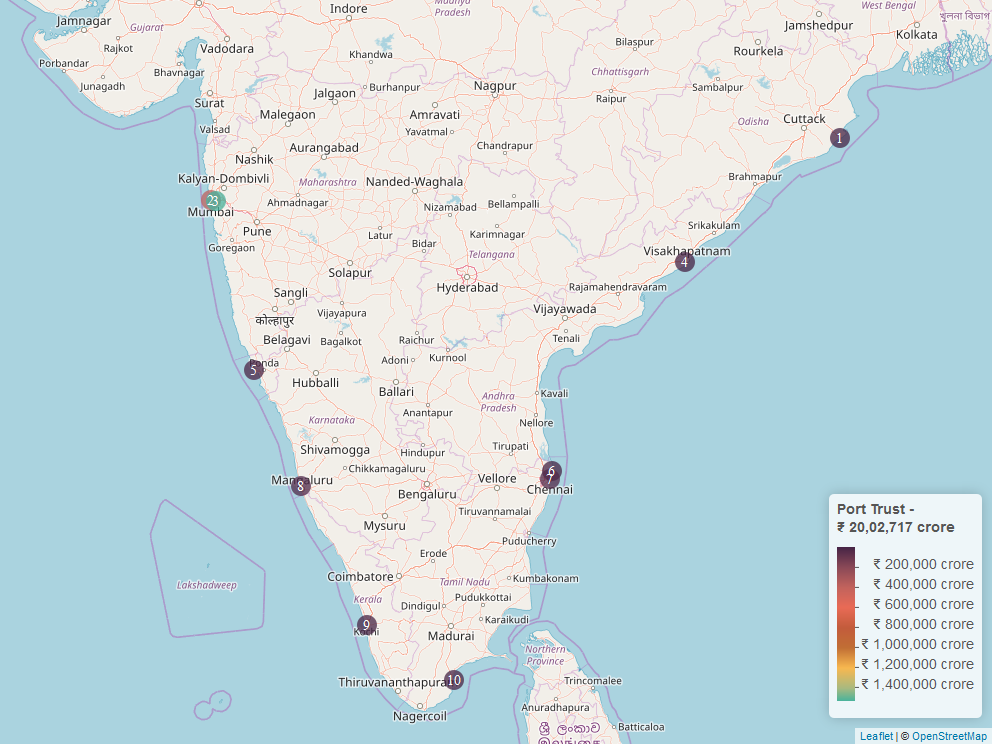 Mumbai Port Trust Mumbai Port Trust owns most valuable land in India. It owns close to 2,000 acres which form about one-sixth of the total island and is of a great financial value. As a port, Mumbai has been a relative decline for 30 years. In 2010-11 the port posted a net deficit of Rs. 438 crores. Mumbai port trust's land leases from Taj Mahal Hotel and Royal Bombay Yacht Club to abandoned textile mills and half warehouses of cotton green. Mumbai port trust also owns the major land of Ballard Estate. Mumbai Port Trust had over 2900 leases across 2466 tenants as of August 1, 2011. According to the Mumbai Port Trust's website, total land of MPBT leased is in the table adjacent.

Mumbai Port Trust’s land operations are non-transparent. In many cases, MBPT is able to receive no rent. It is estimated that MPBT is able to collect only about 30 percent of its billed rent. After accounting for operating and other costs the net surplus from estate activity amounted to Rs 18.25 crores (2010-11), a small value given the valuable properties leased out. Many of the leases which have expired have not been renewed. As of September 2002, there were 1900 cases pending in various courts. The lack of publicly available information permits corrupt land dealings to occur.
The Port Trust has not prepared a Land Use Plan as required by national policy. Centrally-controlled institutions rarely volunteer that they have surplus land.

According to an estimate made by George Peterson and Vasudha Thawakar [3] If only 500 acres of MbPT’s 1860 acres can be managed, over the long run, according to economic and urban development principle, it can fetch a value of roughly Rs. 1.25 lakh crore,