The Indian Railway is a public enterprise owned by the central government and administered through the Ministry of Railways. The total area of land under the Railway network across the country is about 4,614.87 sq. km. Of this area Railways by its own admission has 463 sq. km. (1,14,491 acres or an area equal to 86,700 football fields) land vacant and 22.4 sq. km of land encroached.

In 2006, the Railway Land Development Authority (RLDA) was established as a separate statutory body. The plan was to gradually hand over excess land with commercial potential to RLDA for development, sale, or lease. Newspaper accounts at the time estimated (optimistically) that more than US$100 billion (between 7-7.5 lakh crore) eventually could be realized from monetization of surplus rail lands. RLDA has nearly 55,910 acres of land available with it for disposal[1]
See the map and its accompanying table highlighting publicly available information on the vacant land of 2,040 acres valued at Rs. 4,127 crore. 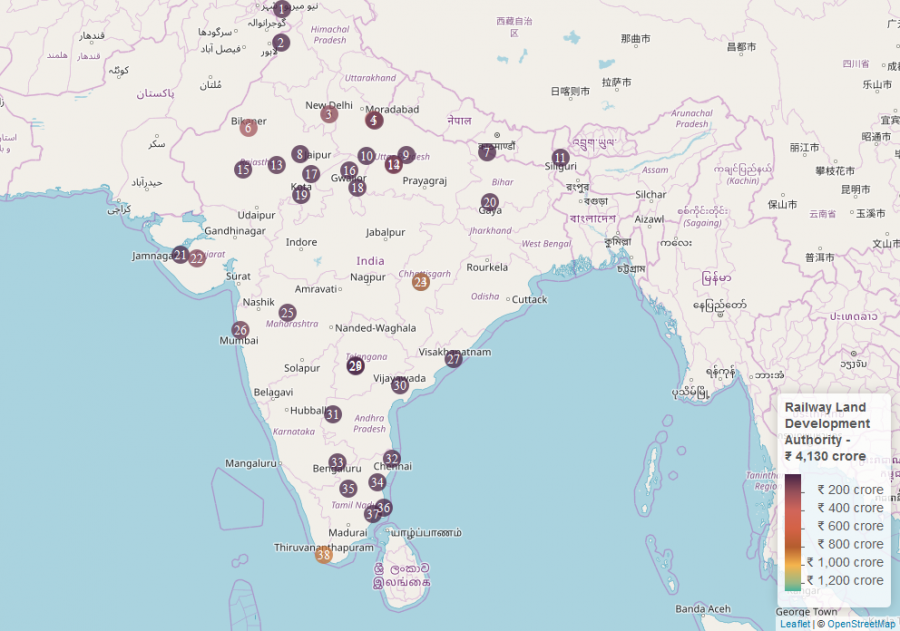 Another 4,367 acres of land valued at Rs. 38,741 crore was uncovered set out for possible usage of logistic parks. See Map 2 and its accompanying table for detailed information. 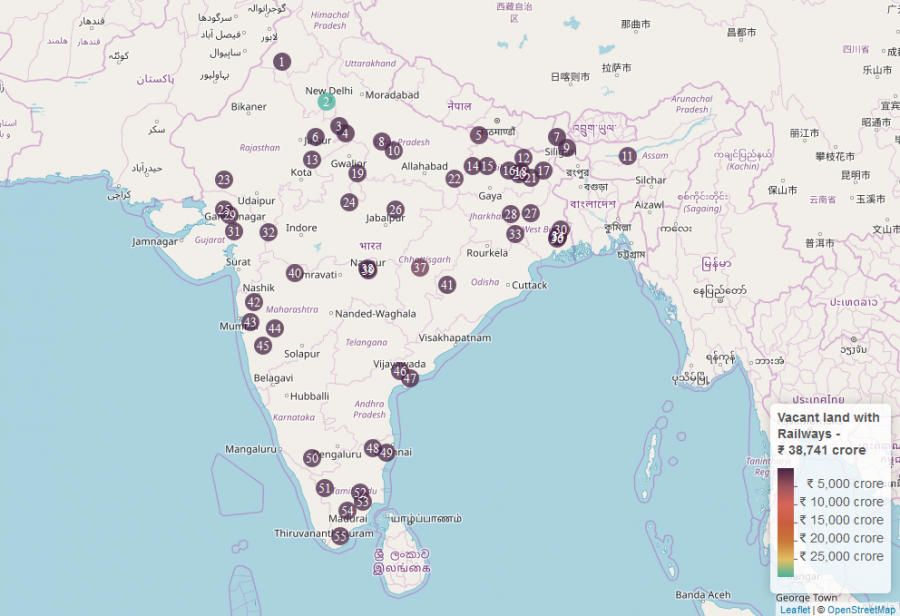 A valuable 11-acre parcel, near the Bandra (East) railway station, had been proposed for commercial development since 2006. Auction reserve prices had been set between ₹ 3,700 crore and 4,200 crores at different times.[4]
However, the property has failed to attract acceptable bids at six successive auctions. At the height of the land market in Mumbai, Railways issued bid terms that would have required the developer to build two identical office towers, one to be given to Railways for offices free-of-charge, the other to be available for commercial market leasing. The restrictions squeezed profit out of land development. No bids were received.
Subsequently, the dual-tower conditions were dropped. Auction management was turned over to RLDA. Indian Railways worked with the State of Maharashtra to reach an agreement that the Floor Space Index (FSI) for the site would be increased from 2 to 4, in order to maximize land value. In return, Railways agreed to allocate two-thirds of land lease proceeds to invest in the suburban rail plan for Greater Mumbai. However, at the last minute, a private citizen brought a claim in court that the property belonged to the State of Maharashtra, not to Railways. Maharashtra joined the plaintiff in the case, first at the level of revenue collector, later at the level of Minister of Revenue. Attempts to auction the property attracted no bids, as long as title was disputed.
There are many stations along the Mumbai sub-urban local transport stations with vacant land that can be utilised for constructing high rise workspaces. Such a potential usage is the norm across most advanced cities in the world.