The Rajasthan State Industrial Development and Investment Corporation Limited (RIICO) was established on 1st January 1980 under the Company Act, 1956. RIICO has around 28 regional offices.

The main objective of RIICO is to promote industrial development in Rajasthan. RIICO has 338 industrial areas across the state. RIICO also acts as a financial institution by giving loans to small, medium and large enterprises.

RIICO hold vast tracts of industrial land across the state which is lying unused. The total area of unutilized land held by RIICO is 1149 acres (or more than 800 football fields). The total value of these unused land parcels is about ₹ 2320 crore [1].

The Comptroller and Auditor General of India (CAG) exposed extensive irregularities in the functioning of RIICO. CAG stated that RIICO failed to provide basic infrastructure facilities in industrial areas, due to which the pace of industrial growth in Rajasthan became slow. In 2006, RIICO allotted 10 acres of land to United Breweries Limited in the Chopanki Industrial Area (Bhiwadi II). CAG pointed out that the land was reserved for hospitals, parks, and roads. The area was declared as Dark Zone by CAG [2].

RIICO sanctioned the plot for ₹ 1,000 sqm. CAG observed that there was a violation of rules as the prevailing rates of the plot were ₹ 15,90 sqm and ₹ 1,800 sqm. This needless subsidy on land caused a loss of ₹ 1.36 crore to the Rajasthan Government. CAG revealed that in 2004-05 the land under litigation or encroachment held by RIICO increased from 260 acres of the value of ₹ 8 crore to 651 acres of the value of ₹ 83 crore.

CAG further revealed that RIICO has no information about their own industrial areas which are sitting on 1540 acres of land in the state.

This shows that Industrial Development Corporations such as RIICO acquire huge tracts of land in the name of industrial development and misuse them at the expense of the development of people. RIICO couldn’t even protect their own land from encroachments and do not even know where their industrial areas are located.

Such abused parcels of land should be freed-up from the control of RIICO so that it could be utilized efficiently for the development of the people of Rajasthan.

Refer to the table and accompanying map for the details 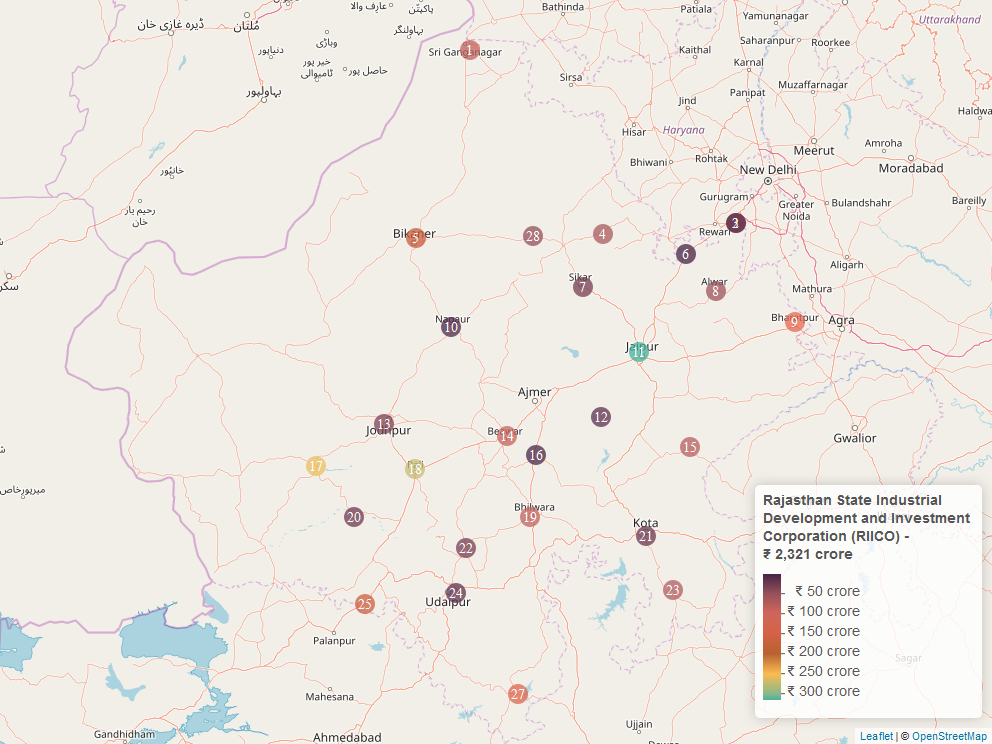